With only a few days before Airwaves Portrush 2018 we continue or Aircraft profile countdown!
First up on day 2 is the Huey and Loach display who have become a very regular fixture in Portrush over the last few years.
The helicopters are most famous for their service in the Vietnam war and both of these helicopters that will be on display actually saw service in Vietnam! They will also be joining the Wildcat on Static when not displaying!
In 2000 The Huey was sent to Arizona for storage until 2003 when it was brought out and underwent a full restoration. It is now the only Huey flying in Europe that served in Vietnam.
The aircraft has been restored back to Vietnam combat livery as it would have appeared with the 129 Assault Helicopter Company. We are working to get a more complete history of the aircraft.
Helicopter OH-6A 69-16011 was manufactured in 1969 and was number 470 off the production line of the Hughes Tool Company. The aircraft was shipped direct to Vietnam where it served in the 20th Transport Company.
The aircraft technical records show that at 250 hours from new on the 17th August 1970 whilst serving in this Unit, the helicopter was on a recon mission and came under fire at a flight level of 100 feet and 80 knots in South Vietnam and took 11 hits from small arms and automatic weapons. The majority of these hits were on the underside of the aircraft causing damage to the fuel system and some aircraft components. Luckily the armour plating proved effective protecting the flight crew and out of the three crew on board, only one was wounded in action.
The work started on the OH-6 in the Summer of 2008 returning the aircraft to its original Vietnam livery. It now flies with the Huey after a full restoration.

Next up is the fantastic Pitts Special Display Team known as Wildcat Aerobatics. The team put on a fantatic display and it will be great to see them again.
Formed in 2010, Wildcat Aerobatics was created with the aim of promoting the amazing world of aerial sport flying and the more extreme elements of the leisure aviation industry.
It does this primarily through the delivery of a crowd-thrilling formation aerobatic display that entertains hundreds of thousands of spectators every year at shows across the length and breadth of the country ranging from large-scale public events to much smaller private celebrations.
The team use the Pitts S2 aircraft. The S2 has been used by teams in the US, Europe, Africa and the Far East and is a proven air display favourite. The biplane has a special appeal to airshow crowds and has been displaying in various guises since it’s unveiling at Homestead, Florida in 1946.
In addition, as a minor part of the overall activity of the team, Wildcat Aerobatics also provides introductory flights to people eager to experience the thrills of flying formation aerobatics. Through these exclusive activities, we aim to promote the team, its sponsors and attract new pilots to this most demanding and exciting of extreme sports. 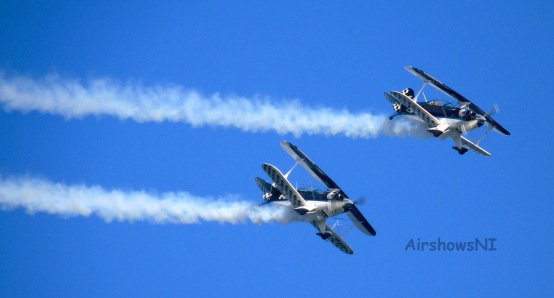 Our final profile for today is the Irish Coast Guard S92 helicopter, The Sikorsky S-92 is a four-bladed twin-engine medium-lift helicopter built by Sikorsky Aircraft for the civil and military helicopter market. The S-92 was developed from the Sikorsky S-70 helicopter and has similar parts such as flight control and rotor systems.
The Irish Coast Guard had previously used the S61 Helicopter until replacing them with the S92. The first S92 was delivered to them in January 2012 and given the registration EI-ICG with the callsign ‘Rescue 115’
The S92 Search and Rescue Demo is very popular at seaside airshows throughout Ireland, North and South and is a regular attendee. This year the S92 will be displaying on Saturday only! 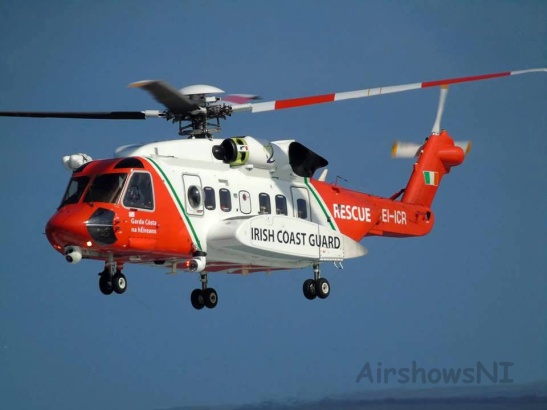 Check back tomorrow for another aircraft profile in the run up to Airwaves Portrush.